Push
This option in the Physics section sets the behavior of buttons from the standard ON / OFF to push button, when available. 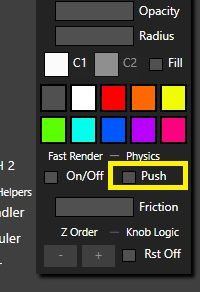 Friction
Inertial sliders have properties which add friction (or drag) to the slider, to slow it down.
The motion is slowed down by adding friction to the Inertial sliders.
Friction will only affect the slider, upon release, this means while your finger is touching the slider, it will move normally, and as soon as you release it, the slider will keep moving according to the friction setting.
Encoders also support Friction. 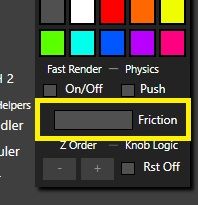 Fast Render
Some low powered CPU’s might have a hard time keeping up with the movement of faders in Chameleon. Fast Render removes the decorative details of Standard Sliders in order to boost performance.  (usefull only with really underpowered CPUs,  i.e  ATOM)