On OS X, to get to Live’s MIDI Remote Scripts directory:
Go to Applications, find Live.app or Ableton Live x.app, right-click and select Show Package Contents. The directory is located at:
Contents/App-Resources/MIDI Remote Scripts
Chameleon run on Windows, but you can send MIDI from Chameleon running on a Windows touchscreen/tablet trough WiFi and or wired network.

If the simple process of install is performed correctly you see a red container of 4x4 clips.
You can change at any time based on what you need. 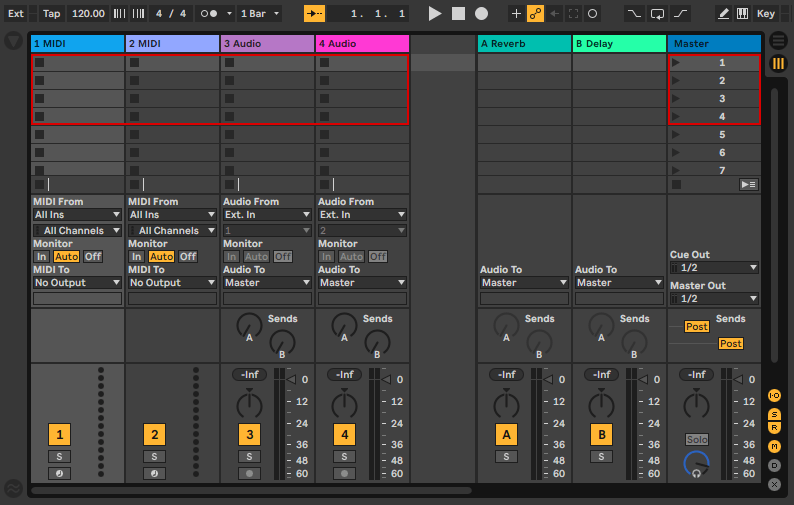 SCRIPT SETTINGS
The following settings will be found in Preferences on the MIDI/Sync tab.

The script’s functionality does not require turning on any switches under MIDI ports. However, if you’d like to be able to use MIDI mapping in Live, you will need to turn on the Remote switches for the MIDI ports selected above. If these switches are turned on, this will open up the possibility for conflicts with mappings created by other controllers. 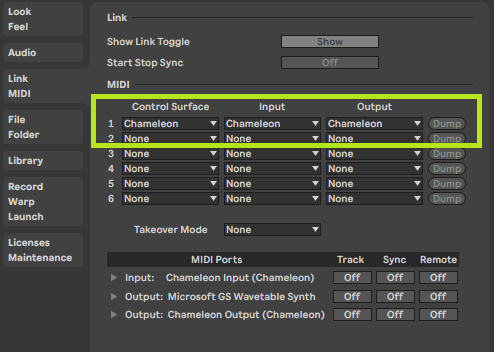 SCRIPT VARIABLES
The Chameleon folder contains a file named UserPreferences.txt that has some easily modifiable variables that you may want/need to change (such as the number of Tracks and Scenes the script provides). After making changes to this file, you will need to restart Live in order for the changes to take effect.

SCRIPT OVERVIEW
The script supports a variable number of Tracks (1 to 8) and Scenes (1 to 8), which can be set via the Script Variables. The MIDI messages that are used are the same regardless of the Track and Scene count.

example:
Clip grid with 4 Tracks and 4 Scenes, the CC numbers you’d use for launching Clips would look like so:

The Track EQ functions will apply to the first EQ3 or EQ8 Device on a Track or within a Rack on the Track. 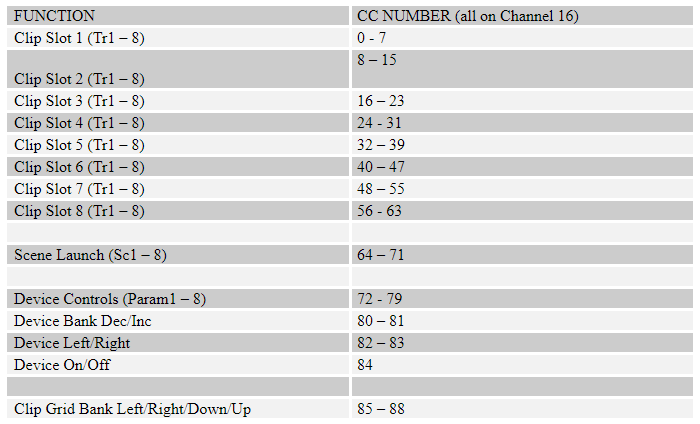 The Device functions apply to the Device selected on a Track (denoted by a hand icon on the Device’s title bar).

These values can be changed via the Script Variables.
Chameleon provide Ready to use Ableton Live Clip 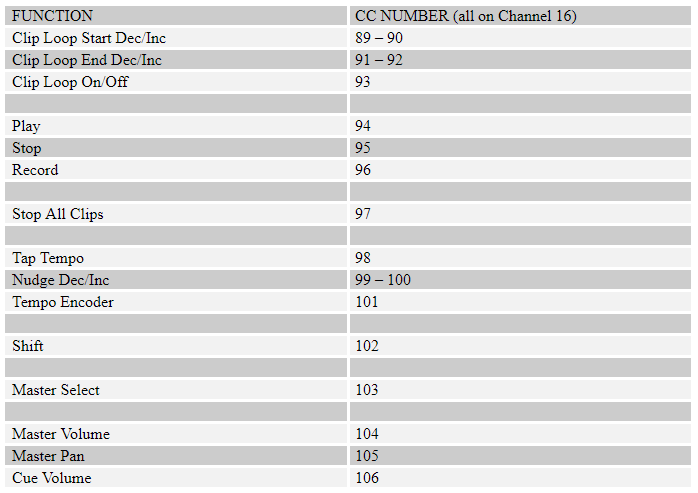 The Clip Loop functions all apply to the Clip that is selected.

By default, the Tempo Encoder function will adjust the Tempo in 1-BPM increments. When Shift is pressed, the increment will be 1/10th of 1-BPM. In both cases, the maximum Tempo that can be set is 999.0 BPM. This can be changed via the Script Variables.

You can set the resolution used for the Clip Loop Dec/Inc and Tempo Encoder via the Script Variables.

IMPORTANT IF PLAN IMPROVE THE SCRIPTS - SCRIPT LOG
Each time the script is initialized, it will write some lines into Live’s Log.txt file. These lines all start with SM LOG ------- and contain info on the version of the script, version of Live and info about Script Variables that were read. The Log.txt file will also contain info on MIDI settings and errors that occur in the script. This is all very useful for troubleshooting.

I'm having an issue with it.

Midi Remote scripts should be added on the following location in my case C:\ProgramData\Ableton\Live 10 Suite\Resources\MIDI Remote Scripts

I can select Chameleon as a control surface ... so far so good.

But the preferences are not being recognized when starting Ableton again because i get the 8 on 8 grid and not the 6 on 4 grid what i have configured in my case.

The logging shows no error or anything.

Where does it go wrong ?

Checking the issue, i think there is a bug on the script or something change in Ableton.
I back here soon.

Thanks for quick response.

If can create some video with your template working on youtube will be great! 🙂